The United Church of Canada

The United Church of Canada has launched an Extreme Hunger Appeal as the humanitarian crisis in Kenya, Nigeria, Somalia, South Sudan, and Yemen reaches grave levels. Starvation and extreme hunger are rapidly reaching a scale the world has not seen before in most of these countries. Vulnerable people are most impacted, including children.

Climate change has created a devastating and prolonged drought, resulting in both water and food shortages. Ongoing conflict is also contributing to the crisis as many families are forced to flee their homes, farms, and livelihoods.

All donations for this appeal will go to our long-term Mission & Service partners, including ACT Alliance, which is saving lives in the region. The Canada Food Grains Bank is also providing emergency food relief.

We share your grief, as we share your determination to stop the forces of hate that seek to divide and destroy us 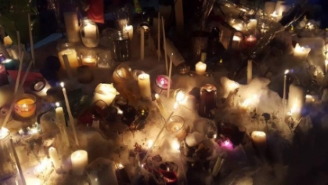 Letter of Solidarity for our Muslim Neighbours

To all of our Muslim brothers and sisters,

Our hearts overflow with sorrow for the victims of the shooting at the Centre Culturel Islamique de Québec last night. Shock and outrage mingle with our tears at this horrific act of terror perpetrated against innocent, faithful people. We are holding you all in our prayers at this most terrible time.

This heinous violent act and other recent attacks targeting Muslims in Quebec and elsewhere are designed to instill fear and division within and between our communities. We will not let this happen. The United Church of Canada stands with our Muslim neighbours. We share your grief, as we share your determination to stop the forces of hate that seek to divide and destroy us. Trusting in a compassionate and just God, we will resist fear and prejudice with love.

The Resilience of Compassion

Dear members and friends of the United Church,

I am writing to you with a heavy heart but also with a sense of hopefulness. The horrific acts of terror committed over the past month in Paris, Beirut, and Baghdad suggest that a new phase of terrorism has begun. Our hearts go out to all whose lives have been thrown into grief, fear, and chaos by these barbaric acts. Yet amidst the sorrow and grief, there have been glimpses of humanity at its very best. A friend saving the life of another as bullets rage, a father refusing to respond to the murder of his wife with hate, and community groups insisting that, despite what has happened, they will leave their doors open to welcome Syrian refugees. These are living testimonies to the resilience of compassion.
As a church we have been praying for all the victims that were harmed in these events. We also echo a recent statement of the World Council of Churches  that said, “In the face of this brutality, all people of faith and of good will must stand together to recommit to respecting and caring for one another, to protecting one another, and to preventing such violence.” 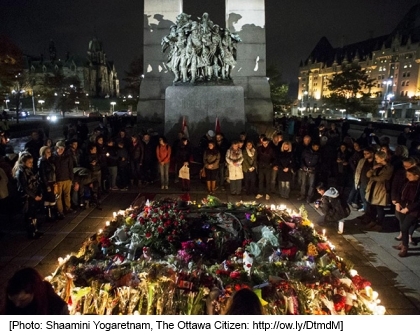 Last week’s tragic events in Ottawa and Saint-Jean-sur-Richelieu have been on my mind as I enjoyed the hospitality of United Church people in Newfoundland.

How does one make sense of the deaths of two members of Canada’s Armed Forces in acts of violence that defy comprehension? What could possibly motivate one human being to slaughter another? There is no sense to make of these senseless acts. Was it radicalization, mental illness – or a bit of both – we may never know for sure.

What offered me comfort as I grieved the loss of life as a result of these tragic events was an interview I listened to on the CBC Radio program, As It Happens. It is a conversation I want to share with you because as I listened I knew this was exactly what we need to hear in the aftermath of last week’s events.

What I took away from this interview with Barbara Winters was the much needed reminder that there is goodness in this world – we just need to look a little harder when we are overwhelmed with the fear that evil is winning. It is not. The bystanders who stepped in to try to save the life of Cpl. Nathan Cirillo, the Sergeant-at-Arms, security guards, and police officers who put their lives in danger to protect others are proof of that fact. It is at times like these when we are challenged by the worst of human behaviour that we must make an extra effort to appreciate the hope that can be found in witnessing the best of human behaviour.

Moderator  Writes to Prime Minister about Israel and Gaza

In a letter to Prime Minister Stephen Harper, the Moderator of The United Church of Canada, the Right Rev. Gary Paterson, has called on the Prime Minister “to do all that you can to convince the governments of both Israel and Gaza to stop the violence.”

Writes Paterson, “Like many Canadians, I expect our government to uphold international law and Canadian values of equality. Israel has every right to demand security, to live without fear of teenagers being kidnapped and killed and of rockets falling on its cities. But how can this invasion of Gaza, so overwhelming, destructive, and so disproportionate, bring real peace and security?”

The letter ends with the plea, “Concrete steps must be taken toward a just and peaceful end of the conflicts that have ripped this land apart for so many years, so that ordinary people on all sides of every border will know the great gift of peace.”

Moderator Writes an Open Letter to the LGBTQ Community

In an open letter issued today by The United Church of Canada, the church’s Moderator delivers a message he hopes will be heard by the LGBTQ community.

“I am writing today as the spiritual leader of Canada’s largest Protestant denomination, The United Church of Canada. I am also writing as an openly gay man, married to another United Church minister. This introduction may come as a surprise, seeing that so often it is religious leaders who condemn homosexuality, quoting scripture to justify their prejudice,” writes the Right Rev. Gary Paterson.