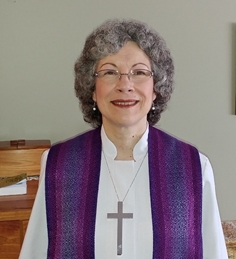 Mary Lynne Whyte (nee Weeks) was born and raised in Listowel, ON. She received a Bachelor of Music degree, Honours Voice Performance, from the University of Western Ontario, then moved to Toronto to sing in the Elmer Iseler Singers (EIS), one of Canada’s professional choirs. While on tour in Nova Scotia, Mary Lynne met her husband, Paul Whyte. Mary Lynne has enjoyed being an at-home mom to two sons while establishing a side career in singing, teaching voice, and conducting, especially through Dublin Street United Church in Guelph, ON where her membership resided for twenty years. Mary Lynne learned to play harp after discerning a call to ‘minister musically’ in the Guelph area, which she did for 6 years until Paul joined the Canadian navy and they moved to Victoria, BC for Paul’s officer training. This is where Mary Lynne began to feel a call to Ordered Ministry. Once Paul was posted to Halifax, she began formal discernment through Stairs Memorial United Church in Dartmouth.

Mary Lynne is deeply grateful to Rev. Sarah Raeburn who mentored her as she studied for three years at the Atlantic School of Theology (AST), both informally before AST, and formally, through the Student Field Education program. After graduation in May 2016, Mary Lynne spent her eight-month Internship in Juniper, NB, at Lake View Pastoral Charge. She was ordained on May 28, 2017, then appointed for three months beginning July 1st as Minister of Word, Sacrament, and Pastoral Care at Rawdon Pastoral Charge in Upper Rawdon, NS. Mary Lynne began an 11 month appointment  at Woodlawn United Church on October 1st, 2017.